I was so excited to get accepted to this festival! I looked forward to it. I was going to get paid very well for it too. So I decided to do a more complicated design than what I usually do: a carousel. I redid my carousel drawing 3 times, so I thought I was ready. 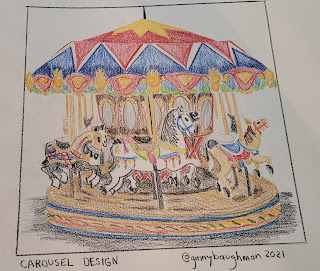 It was going to be an exciting weekend. I was supposed to attend both Friday and Saturday if I could. My husband and I traveled over to Mount Vernon on Friday afternoon. I got a discount on a hotel room at a hotel in town, so we decided to take advantage of it. We arrived Friday about 4 and I got my space taped off and my grid put down. I don't usually work with a grid, but I thought it might be a good idea with such a difficult subject matter. I got finished just before it began raining. It was a hard rain during the early evening and it rained off and on all night. We were able to watch a band in the evening between the rains though.

Looking down the street where our chalk designs were going to be!

The beginning: the tape!

The view from my hotel window before the rain.

The rain in the afternoon 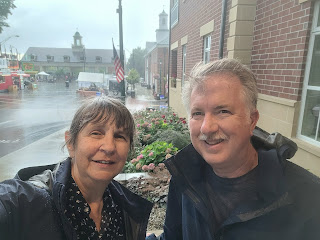 Enjoyed the concert in the evening. 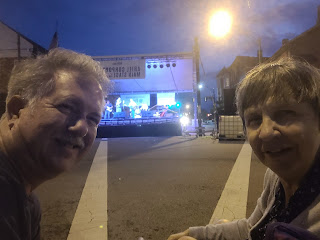 Because I was just right down the street, I was able to get going early on my chalk design. The rain didn't even wash away my grid all the way. So I was ready to get going in right away in the morning. It was a good thing too. I was fortunate that I had shade covering my design until about 12:30. After that it got so hot! It was supposed to be cooler that day, but it sure wasn't at all!
My design also turned out to be quite a challenge! I decided to work from the top down. I got the top of the carousel with no problem, in fact it was looking pretty, good. But the bottom half was a nightmare! I just wasn't sure what to do with the inside of the carousel. I tried to use a color called red/brown, but it turned out to be orange. I didn't like that at all, so I ended up just putting gray over it to darken it and make it go into the background. By the time I got to the horses I was so tired and it was so hot, I just couldn't do a good job on them at all. I just wanted to be done with it. I finally got finished about 3:00 and it felt like it was 100 degrees out side. I was so tired! I was so unhappy with the design. But when I posted pictures on Facebook everyone liked it and that made me feel so much better. My husband, Doug and I stayed around for some supper, before heading home later that evening. Really wished we had booked a room for that night too! But it was so good to be home after such a long day!

The view from my hotel room, right down the street from where I would be working. 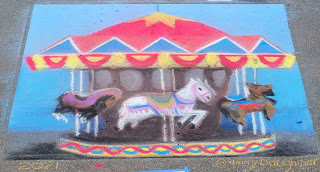 Finished design
The beginning: The grid and the tape from the day before were there even after all the rain we had!

Doug stopped by to take a picture of me before he went off on his bike ride. This is what he often does while I'm doing chalk art!

Stept #4 (Didn't like the orange inside color, although now it doesn't look too bad!)

Step #5 Added the bottom and tried to make the red/orange inside darker.

Stept #6 Working on the horses.

Step #6 Making the inside darker so it will fall back into the picture.

Called it finished at last! Before the tape came off.

Not too bad after all! 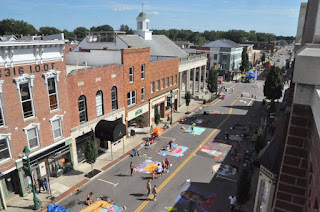 These two pictures (above and below) were from event photos. You can see my artwork from above and me working on my design early in the day! 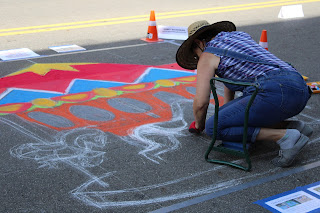 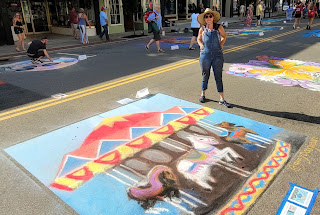 Well after all was said and done...not too bad after all! I was hot and tired though! 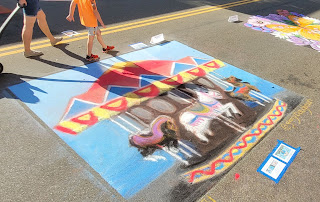 This was from an upstairs window, but unfortunately the screen was in the way!

Better pictures from later that evening!

I was asked to do a chalk mural for Art in the City in Court House Square in Downtown Dayton for the Downtown Dayton Partnership. I was excited to do this! They wanted me to do their logo, with my own twist. I decided add flowers to their logo. It was not on the day the day of, but the day before the event. They said that they were having a "preview event" at lunchtime on Friday Aug. 6 the day before the event.

I showed up about 11:30 am on Friday, dropped off my stuff and then went to park my car. When I returned I was surprised how empty it was in Court House Square for being a supposed "event." There was an info table and a band performing on the stage. There were only a very few spectators. But there was a Dayton police car parked right next to me, which made me feel more safe. The art in the city folks were very nice and even brought me a tent when I asked for one. I set up, then took a break for a quick bite of lunch, and then started my chalk art. Suddenly I noticed that everyone was packing up and leaving, including the Dayton Police Car. In a few minutes I was all alone on the square along with some questionable looking people! I worked as quickly as I could to get my mural finished, so I could get out of there. In a little while the intern, that I had talked to earlier, came to see the I was doing OK. Fortunately she gave me the phone number of the Downtown Dayton Partnership, which was on the 6th floor of the tall building that stood next to me on the square.

Fortunately I decided to do a smaller version of my mural than I had planned and I worked as quick as I could to get the mural finished in the oppressive heat. When I finished, I didn't know what to do next. I didn't want to leave all my stuff on the square while I went to get my car. So I called my husband, Doug, to come rescue me all the way from Centerville. After that I called the Downtown Dayton Partnership and told them that they needed to come pick up their tent. I packed everything up and waited. About the time Doug arrived the folks from the Partnership came to get the tent. I guess I could have waited for them to come, but I just wasn't sure. I was glad to see Doug and we packed my stuff up and he dropped me off where my car was parked.

I was a little frustrated the way things turned out. The next day during the actual Art in the City event I had nothing to do. I ended up at the Dayton Society of Artists table doing nothing at all. My artwork did end up front lining the event in Courthouse Square and it did stay nice throughout the day, until it rained later in the day. But I wasn't there with it to talk to people. I did see my artwork posted on some Facebook sites about the event. 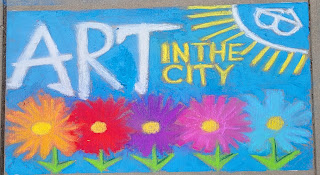 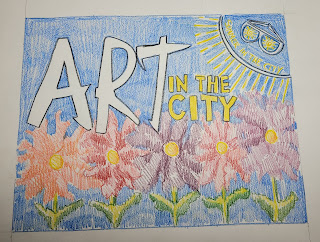 Design along side of original logo 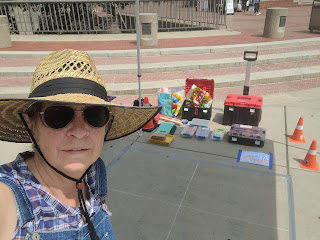 All by my self

Decided to wet it all down to make it more permanent 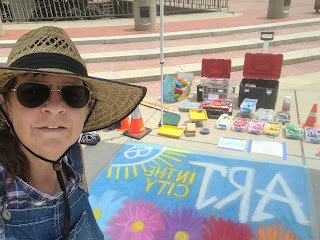 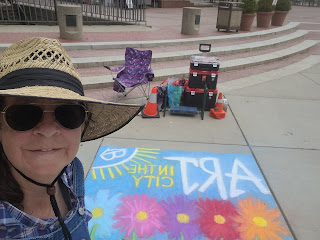 Before and after slight change to the "T"

The next day on Saturday 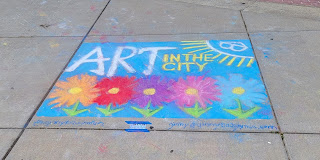 These two pictures (above and below) are from Saturday (the next day). 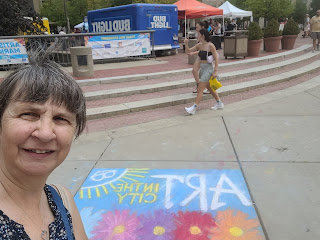